California Fires Help Suppress US Gasoline Use 10% Below Seasonal Norm

Home/On-Road, Traders/California Fires Help Suppress US Gasoline Use 10% Below Seasonal Norm
Previous Next

California Fires Help Suppress US Gasoline Use 10% Below Seasonal Norm

Kayrros measures US non-commercial driving in September 2020 declined more steeply than in past years, while commercial driving increased relative to past seasons. The overall trend is observed across the US, but is exaggerated further by wildfires in the western US. Driving in California, in particular has dramatically dropped off since a state of emergency was declared on August 17.

Non-commercial driving declined in the week ended September 18 across all US regions, while commercial driving has increased, Kayrros measurements reveal. While the drop in gasoline consumption is typical for the season, this year’s decline is occurring from a steeply lower baseline in the wake of the Covid-19 pandemic and has been further compounded by the impact of wildfires on the West Coast, so that demand is roughly 10% lower than seasonal norms. Diesel demand, however, has proven to be more resilient, with demand 5% higher than the typical 4-week period in past seasons. 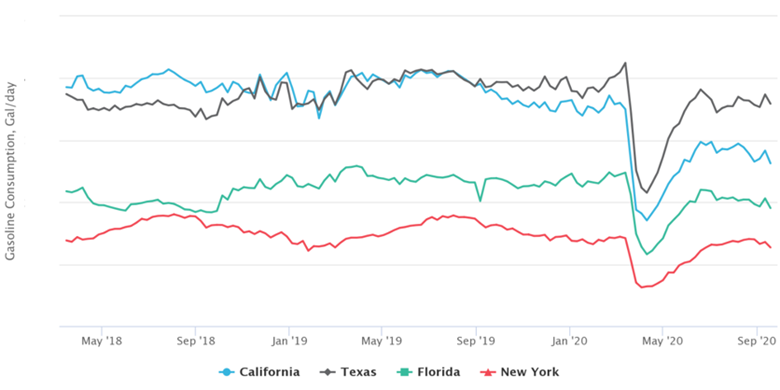 The four most populated states — California, Florida, New York and Texas — are all driving the general trend in declining gasoline consumption since early August. However, California has shown a much steeper decline compared to typical seasonal norms.

Kayrros On-Road Demand data show California’s wildfires have cut gasoline demand in the State by roughly 10%. As wildfires that led California to declare a state of emergency on August 17 continue to rage, passenger transportation demand has been sharply curtailed. Kayrros measures a steep decline in mileage data for the state, signaling a change in driver behavior since the declaration of a state of emergency.

The overall decrease in miles traveled by mobile devices is attributed entirely to dwindling gasoline demand. Kayrros measured an average 10% drop in gasoline consumption in California between mid-August to present. In 2018 and 2019, consumption levels dropped 5-6% during this same time period. Diesel demand, however, has been gradually increasing in the state.