Unlike carbon emissions, which are comparatively easy to estimate but hard to address, methane emissions have long been elusive to identify but, once detected, offer considerable low-hanging fruit for climate action.

Due in part to a lack of reliable data on methane emissions, climate policy has long focused on carbon at the expense of methane, but recent advances in remote sensing technologies and atmospheric measurements are changing that. Satellite data are now being harnessed to track methane hotspots worldwide with unparalleled precision, carving a path for all energy stakeholders to take immediate action on emissions reduction.

Operators in particular can use this technology to develop robust methane monitoring systems, positioning companies to be prepared for more stringent regulations while renewing their social license to operate. With a range of technologies now available, a cost-effective and transparent detection system can combine monitoring satellites with individually focused campaigns.

Methane is both a climate and a financial risk

Methane is a potent greenhouse gas responsible for about a quarter of today’s global warming levels, making it the second-largest contributor to global warming after CO2. The energy sector represents about 40% of all methane released by human activity each year, with a small number of major events—known as super-emitters—representing the majority of the emitted volumes. 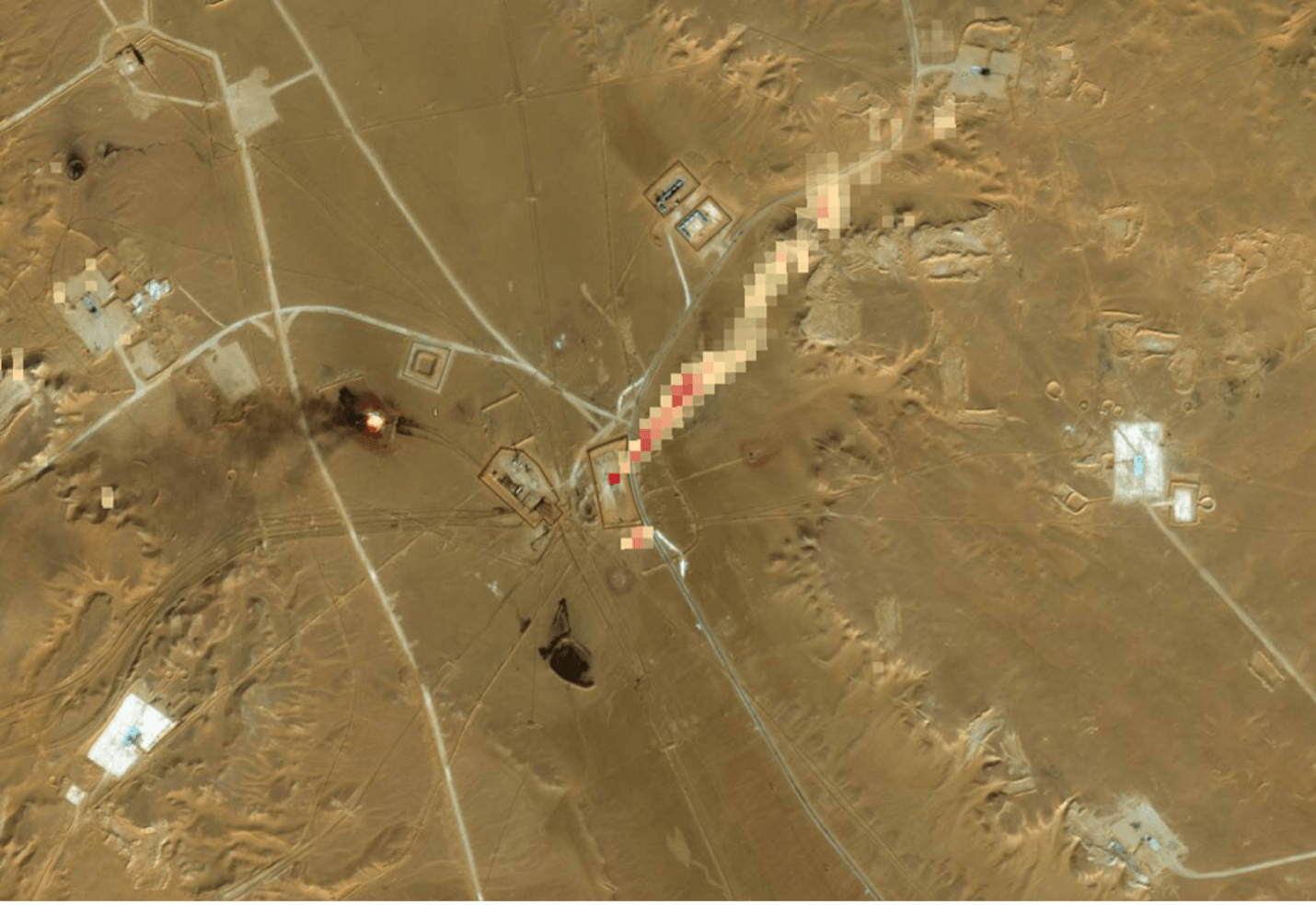 Recent advances in atmospheric detection have exposed considerable disparity between traditional bottom-up estimates of methane emissions derived from emission factors, and new atmospheric top-down measurements. Satellite readings suggest that past estimates may have undercounted emissions by as much as an order of magnitude. While that points to an even more adverse impact on climate from fossil fuels than previously thought, there is a silver lining—most methane super-emitters can easily be eliminated.

Simply by addressing the largest methane emissions, which often can be done at negligible cost, fossil fuel producers can deliver the biggest reduction in greenhouse gas emissions since the industrial revolution. As the UN Environmental Program (UNEP) and the Climate and Clean Air Coalition (CAAC) recently noted, methane is our strongest lever in the campaign to reduce our climate footprint and slow the pace of global warming.

Methane detection technology is key to unlocking these benefits. Not only have new earth-observation satellites been deployed to track emissions, but advances in image processing have dramatically sharpened our capacity to extract information from the raw data transmitted by such satellites to provide the tools needed to identify priorities and take successful abatement measures. Studies show that satellite data bring mitigation opportunities to the fossil fuel industry that are equivalent to 1-2 Gt of CO2 per year. This low-hanging fruit can be harvested at low cost, or even at no cost at all, over a short timeframe.

Regulators are aware of this opportunity to reduce the footprint of the energy supply chain, and are looking for ways to incentivize the oil and gas industry to take action. The European Commission is currently discussing methane legislation requiring a robust MRV (measure, repair, verify) system, while the US administration is discussing a tax on methane emissions.

All regions and operators are not equal in terms of methane emissions, and thus face different consequences from new regulations and increasingly stringent performance requirements from investors and consumers. Using satellite imagery from the European Space Agency, Kayrros has built a global methane monitoring platform that analyzes methane concentrations on a daily basis around the globe, and compares methane footprints to highlight differences between countries and operators.

Data from countries and production basins show that methane emissions are not always directly proportional to the amount of energy being produced. Turkmenistan, for example, sits at the high end of methane intensity, defined as the ratio of methane released to energy produced. The world’s largest oil and gas producer, the US, also has a relatively high emissions intensity while Russia holds a significant share of total emissions. Some of the top producing countries, however, are among the lowest emitters with Saudi Arabia being a case in point.

Kayrros has also observed similar disparities between operators, whose methane intensity strongly depends on the region and on the operational management of emissions. Most large emissions take place in a “controlled” way; some occur along gas pipelines and are often confirmed by companies themselves, since venting—or  the voluntary release of natural gas into the atmosphere—is used for security reasons during maintenance operations. This could often be avoided, for example by flaring gas with mobile flaring systems. In other cases, particularly on oil wells, it is possible to route the gas to the grid or to use it on-site for power generation to avoid flaring, although this is a solution that still releases carbon dioxide.

In parallel, unintentional and often smaller leaks happen along oil and gas installations and require constant monitoring to ensure quick detection and intervention. These leaks can be caused by human negligence, technical issues, or ageing infrastructure. Just like venting, unintentional methane leaks are not accurately reflected by the emissions factors used by operators to estimate their emissions, leading them to underestimate the methane issue and blindly deploy costly detection campaigns. Direct measurements are thus becoming a must-have, both for transparency and for cost-effective abatement strategies.

Toward the optimal methane surveillance system

There has been a proliferation of new technologies to provide direct methane detection and measurement in recent years. Satellites, drones, airplanes and ground sensors all have pros and cons regarding scalability, cost-effectiveness, and accuracy. Only an integrated system can overcome the shortcomings of the available technologies, combining the global coverage of monitoring satellites and the spatial resolution and sensitivity of targeted local campaigns.

Monitoring satellites are the cornerstone of any methane monitoring system as only they can provide the global coverage and high temporal resolution of daily revisits that are essential to both address the intermittency of large methane vents and the multitude of potential emission sources.

This was demonstrated in September 2020 when the Environmental Defense Fund (EDF) detected a major methane event while leading an aerial campaign above the Permian Basin. From this detection alone, it was impossible to measure the volume of methane released and track how long it had been leaking. Analysis led by Kayrros showed that the leak had begun in July. The same asset was detected no less than 12 times by Kayrros algorithms before the EDF campaign, with emissions rates as high as 20 tons of methane per hour. 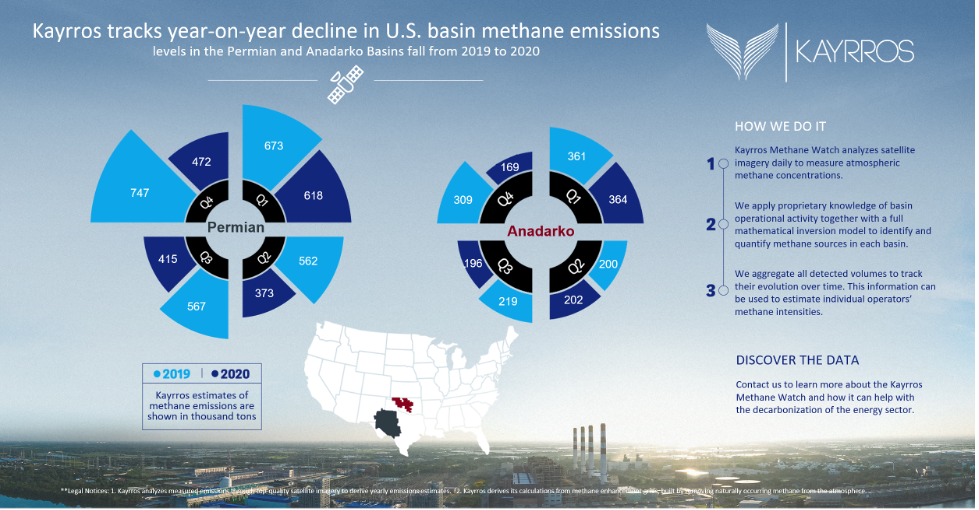 With monitoring satellites, Kayrros can detect more than 90% of the methane emissions at the basin level and track changes in realtime (Source: Kayrros analysis of Sentinel-5P data in 2019 and 2020).

Time is of the essence

Recent advances in methane detection technologies are a game changer for climate action by enabling fossil fuel producers to reduce their methane footprint and deliver the largest reduction in greenhouse gas emissions since the industrial revolution.

Due to the considerable warming power of methane, which is more than 80 times that of carbon dioxide in the first 20 years after its release into the atmosphere, time is of the essence. It is urgent to reduce global GHG emissions and ease the pressure on our rapidly depleting carbon budget. It is not possible, however, to replace fossil fuels in our energy system fast enough to achieve that goal. But fossil fuel producers can deliver it by reducing their own methane footprint, and can do so promptly and cost-efficiently.

You can’t manage what you can’t measure. Methane is the second biggest driver of climate change, but there is a factor of 10 between atmospheric measurements and company estimates. Combining satellite observations and advanced algorithms, Kayrros Methane Watch is the only monitoring platform that measures the methane footprint of companies, regions and countries on a global scale. Whether you are an oil and gas company, a financial institution or a regulator, Methane Watch is an essential tool to decarbonize the energy supply chain and to manage a type of climate risk that was largely ignored until now.