Home/Emissions/Quantifying Methane Emissions: The Time is Now
Previous Next

Climate change is top of mind for both business leaders and governments. Efforts to reduce greenhouse gas emissions have mostly focused on carbon dioxide partly because it is associated with the burning of fossil fuels, and is therefore relatively easy to measure. Methane, on the other hand, has been somewhat forgotten because we lack data. Whereas CO2 always comes out of a boiler or engine, methane leaks can occur anywhere: in a pipeline, a coal mine, a landfill or an oil well.
This is important, because methane is the second-largest contributor to climate change after CO2. The International Energy Agency estimates annual methane emissions in the oil and gas sector alone amount to 79 million tonnes, equivalent to more than 2 billion tonnes of CO2. Leading researchers also argue that current estimates of methane emissions underestimate the true scale of the problem.

Natural gas is considered a clean-burning fuel because its combustion emits less CO2 and fewer other types of pollutants than burning coal. However, the environmental benefits of gas are facing greater scrutiny and minor losses of just a few percentage points along the supply chain would be enough to call the role of natural gas in a low-carbon economy into question. Eliminating these fugitive emissions is therefore crucial, and the onus falls on the energy industry.

Efforts to address this knowledge gap are already under way. In fact, it’s only a matter of time before methane emissions are quantified on a global basis. Breakthrough technologies present the opportunity to monitor methane leaks at global scale, fusing satellite imagery with multiple data sources to autonomously detect and measure methane leaks around the world. At Kayrros, proprietary monitoring systems on emissions have already detected leaks that are very large, with some going unreported and others often very significant. 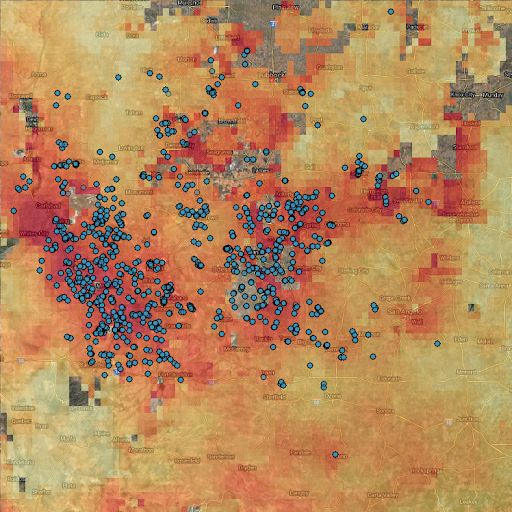 Figure 2. Methane hotspots in the Permian Basin (in red), with wells highlighted in blue.
Source: Kayrros

The purpose of these technologies is not only to detect leaks, but to help companies repair those leaks quickly. With precise measurements come greater understanding; and in addition to energy producers and consumers, an autonomous system driven by satellite imagery gives the financial sector increased visibility on the carbon footprint of its investment portfolios, thereby creating transparency and eliminating reliance on self-reported data.
Greater visibility on greenhouse gas emissions across the entire supply chain would make it possible for the market to reward the most responsible producers and penalize the rest. Oil and gas producers with leak-prone assets will have to upgrade their facilities or face blowback from consumers and investors.
The time has finally come.