The Value of Data Lies in Time — An Amazonian Study

Home/Emissions, Technology/The Value of Data Lies in Time — An Amazonian Study
Previous Next

The Value of Data Lies in Time — An Amazonian Study

When a catastrophe hits, time is of the essence. But for the right actions to be taken, and for the right resources to be directed, situational awareness is paramount. Delay and confusion compound the crisis, ultimately exacerbating damage, destroying the environment, and threatening life. The devastation wreaked by this summer’s forest fires in the Amazon are in a case in point where new and alternative data acquired by satellite and delivered by advanced data technologies demonstrate the value of time. 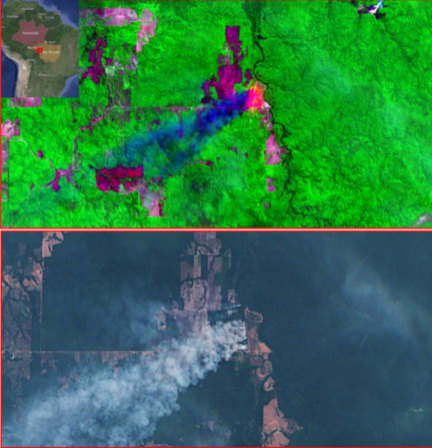 The devastation of this summer’s fires in the Amazon is far-reaching. New data show how such events can be quantified more precisely and more rapidly to accelerate the response and direct resources accordingly.

Kayrros, an innovative leader in data science and technology, has already brought greater transparency to global energy markets by reducing the time lag between event and effect that has dogged energy operators, observers, market players, and investors in the past. The benefit has been better market decisions based on better knowledge. The unique ability of Kayrros has been developed by using an abundance of physical measurements taken from space through a system of orbiting and tasking satellites to push the envelope in producing proprietary data to comprehensively analyze any energy event or of the evolution of any particular data time series.

While systematic and constant news coverage have become a staple of modern society, the integration of machine learning, artificial intelligence, and satellite monitoring are changing the way we see and understand our world. This has proved that the information brought by conventional data is no longer reliable or timely. The increasing prevalence of satellite imaging is raising public awareness, not only on the challenges of energy but also on the connected environmental issues that include climate change and deforestation. Smoke plumes and flames ravaging the rainforest may result in calls for action, but the responses are only truly effective when built on informed access to timely data.

It took nearly 10 days for Brazil to take the major steps needed to curb the Amazon fires. Actions and reactions were increasingly vocal, with criticism and insult apparent. In a project to examine the value of timely data in enabling more rapid situational awareness, Kayrros teams downloaded, cleaned, and processed more than 15 terrabytes of Amazon satellite imagery with a matter of hours.

To extract the value of the information trapped within the data, the first task was to put the fires of 2019 into perspective. How extreme were they compared to previous years? For this, 20 years of NASA satellite data were available. Looking over the data, it was clear that this year’s fire starts were well ahead of any year since 2012 — confirming Brazil’s National Institute of Space Research reports. But this quantitative result lacked the means to measure the size of the burning areas with enough precision.

For this, analysis of color optical images showed the degrees of deforestation in fire-hit areas. High-resolution processing of the images with proprietary algorithms determined the percentage of land already burnt, the area of land still burning, and the area of vegetation remaining. The results displayed significant variation, highlighting where resources might best be focused. Similar analysis using infra-red imagery added further precision to these results.

Beyond more precise identification of the locations where fire-fighting efforts would be best directed, other questions arose. Where would the fumes and debris be heading? What would be the risk to public health in densely populated area? Satellite spectrometry supplied the answer, tracking toxic gas concentration versus time in the areas surrounding the fires. This enabled identification of gases such as carbon monoxide, nitrogen dioxide, and sulfur dioxide — all of which are hazardous to human health. Knowing where pollution in affected areas is increasing can warn and protect local populations. Measurement of significant change in carbon dioxide or methane levels can add detail to appreciation of increased greenhouse gas emissions.

The forest fires in the Amazon made headline news, with their impact clear. The catastrophe attracted worldwide attention with the media feeding on the developing crisis and world leaders expressing opinions and offering help. But despite global reaction, rigorous news analysis shows that the intensity and frequency of the fires overshadowed initial public attention and reaction to the urgency of deforestation and toxic gas emission.

In a world that is faced with increasingly complex challenges, the richness of the data brought by satellite imaging and analyzed with deep data science technology brings the potential of greater situational awareness and delivers the actionable insight needed for increasingly sophisticated responses.