Kayrros is very pleased to announce that six scientific research papers, authored by Kayrros and its partners at the Université Paris-Saclay, have been accepted by the International Society for Photogrammetry and Remote Sensing (ISPRS) Congress 2020 for publication. The papers introduce various new satellite image processing algorithms that will progress the science and scope of geospatial monitoring.

The technical lead of the satellite team at Kayrros, Carlo de Franchis explains “The ISPRS Congress is very special, because it’s the biggest conference in the geospatial world. It gathers thousands of people and it only happens once every four years.” In addition to his role at Kayrros, Carlo is also a researcher at Université Paris-Saclay and is one of the authors behind the newly-published papers.

Some of the topics addressed include automatic cloud detection from satellite imagery series, parking occupancy measurements through Sentinel-1 images and multi-frame super-resolution of SkySat imagery.

Check out more on the papers and their business applications below.

The storage and management of stockpiled materials is a fundamental process in large-scale activities such as mining, civil engineering, and in the management of waste landfill sites. Nowadays, the monitoring of these stockpiles appears to be performed almost exclusively using UAV based techniques. This paper proposes the application of a simple Shape-from-Shading method on mid-resolution PlanetScope images, acquired by Planet’s 130+ Dove satellite constellation, to monitor the evolution of stockpile volumes in 3D.

“This is a technique that’s very much used in planetary science, to measure the topography of planetary bodies such as moons, asteroids or comets,” Carlo explained. 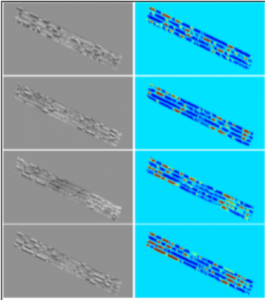 This paper presents a method to estimate the occupancy of parking lots through synthetic aperture radar (SAR) imagery. The algorithm takes Sentinel-1 images as input, along with a mask indicating where the parking lots are positioned to return an occupancy ratio for each image. 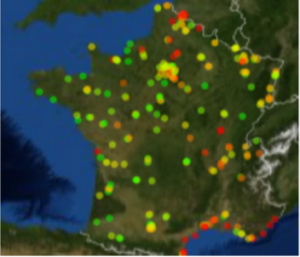 Business Application: Filter clouds from time series on the Kayrros Platform to automatically extract targeted data without the noise.

Detecting clouds is crucial for automatic satellite image analysis. However, several Earth observation satellite constellations don’t have any specific infra-red bands that could help for cloud detection. For these satellites, cloud detection algorithms have to work with standard RGB images.

“We want to be able to mask out clouds from images as a pre-processing step before further analysis” Carlo explained. “Instead of using one single image as the input of the algorithm, we use a time series of images on the same location. You can look at the sequence of images like a video.”

The ground has persistent patterns that can be observed repetitively in the time series, while the appearance of clouds changes depending on the day; to detect the “visible” ground reliably, the team proposes an a contrario local image matching method coupled with an efficient greedy algorithm. 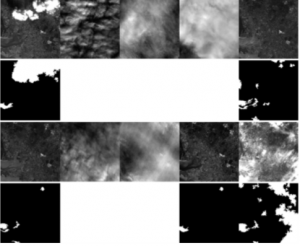 Business Application: Increase the monitoring frequency of any asset by merging the image timeseries from several constellations.

This is a new method for the relative radiometric normalization of long, multi-sensor image time series in order to increase revisit times under comparable conditions.

Figure 4. Composite image, formed by concatenating horizontal (left side) or vertical (right side) bands from each image of the time series. The time series contains a total of 39 images, captured by Sentinel-2 (correction levels 1C and 2A) and Landsat-8. Our algorithm automatically normalizes the spectral values in the series using a few well-chosen references. (Sources: Kayrros, Université Paris-Saclay)

Some recently launched satellites, such as Planet’s SkySat fleet, offer new imaging modes that capture very short videos instead of still images. Compared to sequences of multi-date images, these sequences of consecutive video frames yield a large redundancy of information within the range of seconds, allowing for the increase of spatial resolution using multi-frame super-resolution algorithms. This paper proposes a novel super-resolution method based on a high-order spline interpolation model that combines multiple low-resolution frames to produce a high-resolution image.

Figure 5. Synthetic example of super-resolution on the EIA Target (zoom×2). The figures correspond to the methods described in the paper. (Sources: Kayrros, Université Paris-Saclay)

Applying circle detection methods to satellite images can be used to extract valuable intel on urban or industrial areas. This paper explores several circle-detection methods adapted to low-resolution satellite images. The methods are evaluated and compared in the context of oil tank detection in Sentinel-2 images, where the tanks can have an observed radius as small as two pixels. 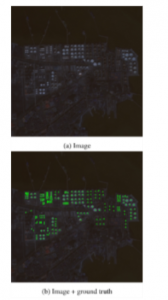