“We used to do drive-arounds in Texas. People had instruments on their cars, and they would drive around shale gas formations to collect emissions data from the source,” said Thomas Lauvaux, researcher at the LSCE, Make Our Planet Great Again fellow and an expert in atmospheric modeling. A lot has changed since then.

Monitoring has gone into orbit, with new satellites such as Sentinel 5P and GHG Sat carrying instruments to monitor gas emissions from sources on the ground. Imagine an interactive world map showing realtime gas emissions where one color indicates the presence of CO2 and another means methane, like looking at a realtime weather map of pollutants.

Kayrros is taking this imagery and building “attribution models,” allowing data scientists to re-allocate the emissions back to their source through atmospheric modeling and advanced mathematics (read more in the recently released IEA Methane Tracker report). 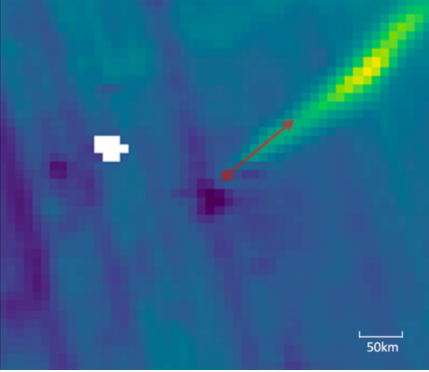 This is where Thomas comes in. Thomas is one of the few global experts in this field, driving his career around the world from US academic institutions to NASA and projects in Indonesia. After earning a PhD from France’s Commissariat à l’énergie atomique et aux énergies alternatives (CEA), the country’s national nuclear research institute, in atmospheric conversions — using atmospheric models to understand the concentration of CO2 between vegetation and the atmosphere — Thomas worked to bring the science into fruition.

At Kayrros, Thomas acts as a scientific advisor to the emissions team, helping to build attribution models: the first step towards establishing policy change.

“If you need to build a policy for 2025, and you’re basing your numbers on 2017, there is a mismatch. If I say that the whole city has released X amount of carbon, I need to know how much comes from cars, at what time of year, and at what intersection… sometimes two highways can cause 30% of the emissions in a city.

So this is when we try to get further than just a number. Beyond that, we try to get information that is relevant to policymakers. So you have information used two or three years after the fact. For example, the latest available information on Paris is from 2017,” Thomas explained.
The team at Kayrros wants to eliminate this time lag and introduce realtime, precise measurements as a resource for change.

“I’d like Kayrros to shape the energy market differently in the future, to provide information that will make people change their minds about buying gas from one place to another because one city is greener than the other and we can prove it,” he said.

One of the primary problems with emissions monitoring is the lack of granularity that previous methods provide.

“The idea is to not only provide a number, but to change climate policies. I could measure the exact emissions of Paris for a given year, but this doesn’t really help the city government to act on their current policies. If you know all of the atmospheric conditions, then you can transfer the emissions numbers to their proper sources. This is where I help consulting. I’m bringing physics into the game,” Thomas explained.

Building a workforce at Kayrros that can model and measure emissions will be a critical step towards reducing worldwide emissions.

“I’m asked to do these kinds of projects in Mexico, in Japan, Indonesia, and I’ve seen that the same two people will be involved in projects across the globe because there’s no other expertise available. So we need to build a workforce. And I think Kayrros has the potential to do it, because they support also training, which is really critical. You can get the brains, but you need the brains to be able to answer the question. You can’t just run a software on a dataset and be done. You need to know what you’re looking at and what you’re doing,” Thomas explained.

Kayrros is bringing in the world’s top scientific leaders to work together and combat climate change. Thomas plays an integral role in bringing emissions expertise straight from the lab into Kayrros, training the team with atmospheric tools that come only from extensive scientific research. The time to take action on climate change is now. It all starts here.