Drone flights over Cushing: Bringing transparency on crude inventories to 100%

Drone flights over Cushing: Bringing transparency on crude inventories to 100%

The time for total transparency on Cushing crude inventories is now

Despite the phenomenal growth of China’s oil storage capacity and actual stock levels in recent years, Cushing, Oklahoma, remains one of the most closely-watched crude-storage hubs in the world – and for good reasons.

Storage levels in the tanks can be volatile, and even small variations in Cushing stocks can drive significant price changes for West Texas Intermediate, a key US benchmark, and other crude grades. Information on Cushing stocks is so critical that the US Energy Information Administration has long published a market-moving weekly Cushing inventory report. By keeping their finger on the pulse of Cushing stocks in realtime, oil traders can not only stay abreast of changes in global oil prices, but often anticipate them.

Hence the value of getting full transparency on Cushing storage, down to the most minute changes. That’s what Kayrros’ latest enhancements to its Crude Oil Intelligence technology now provide.

A small proportion of Cushing storage tanks have fixed roofs and cannot be tracked with radar satellite imagery, a technology used by Kayrros to monitor crude stocks in the rest of the world, where floating-roof tanks are the overwhelming majority.

As small as their share of Cushing storage may be, these fixed-roof tanks can disproportionately affect overall Cushing stocks – and thus prices — and ought to be taken into account. To do so, Kayrros has developed new methods using drone technology, which provides thermal imagery. This has brought Kayrros’ coverage of Cushing stocks to a full 100%.

Cushing, the epicenter of US crude oil activity

Located a few dozen miles away from Oklahoma City, Cushing is one of the largest oil tank farms in the US – and indeed the world — in terms of capacity. Fifteen companies operate in this area, with a total of 431 crude storage tanks, totaling 92 MMb of crude oil storage shell capacity (which represents 14% of total US crude oil storage capacity with the exception of SPR and refineries).

Cushing has both an inflow and an outflow capacity of more than 3 MMb/day, allowing for steep daily changes, and supplies refineries in the Gulf Coast and Midwest with crude oil produced mainly in Canada and West Texas.

Most importantly, Cushing is the delivery location for the New York Mercantile Exchange (NYMEX) benchmark Light Sweet Crude Oil futures contract. Changes in Cushing stocks directly affect the price of WTI, and are an excellent leading indicator of the evolution of Brent prices as well.

There are 78 fixed-roof tanks in Cushing, accounting for 6.3 MMb of crude oil storage capacity (~7% of Cushing overall capacity). To be able to track these tanks, Kayrros developed a new image-processing method based on drone technology and thermal imagery. SAR imagery is based on the tracking of the height of the roof, from which we deduce the fill rate of each tank. This method obviously does not work on fixed-roof tanks, but thermal imagery enables us to observe the precise height of the liquid within the tanks.

Even though fixed roof tanks represent only a small portion of total Cushing capacity, significant moves can be observed on our analysis of this coverage.

From the below graph, one can observe that the measurements of floating-roof tank coverage with the SAR and drone methods are very similar. These almost identical trends validate that the measurements from SAR imagery are extremely precise and justify Kayrros’ use of this technology to monitor crude oil stocks in floating-roof tanks all over the world. 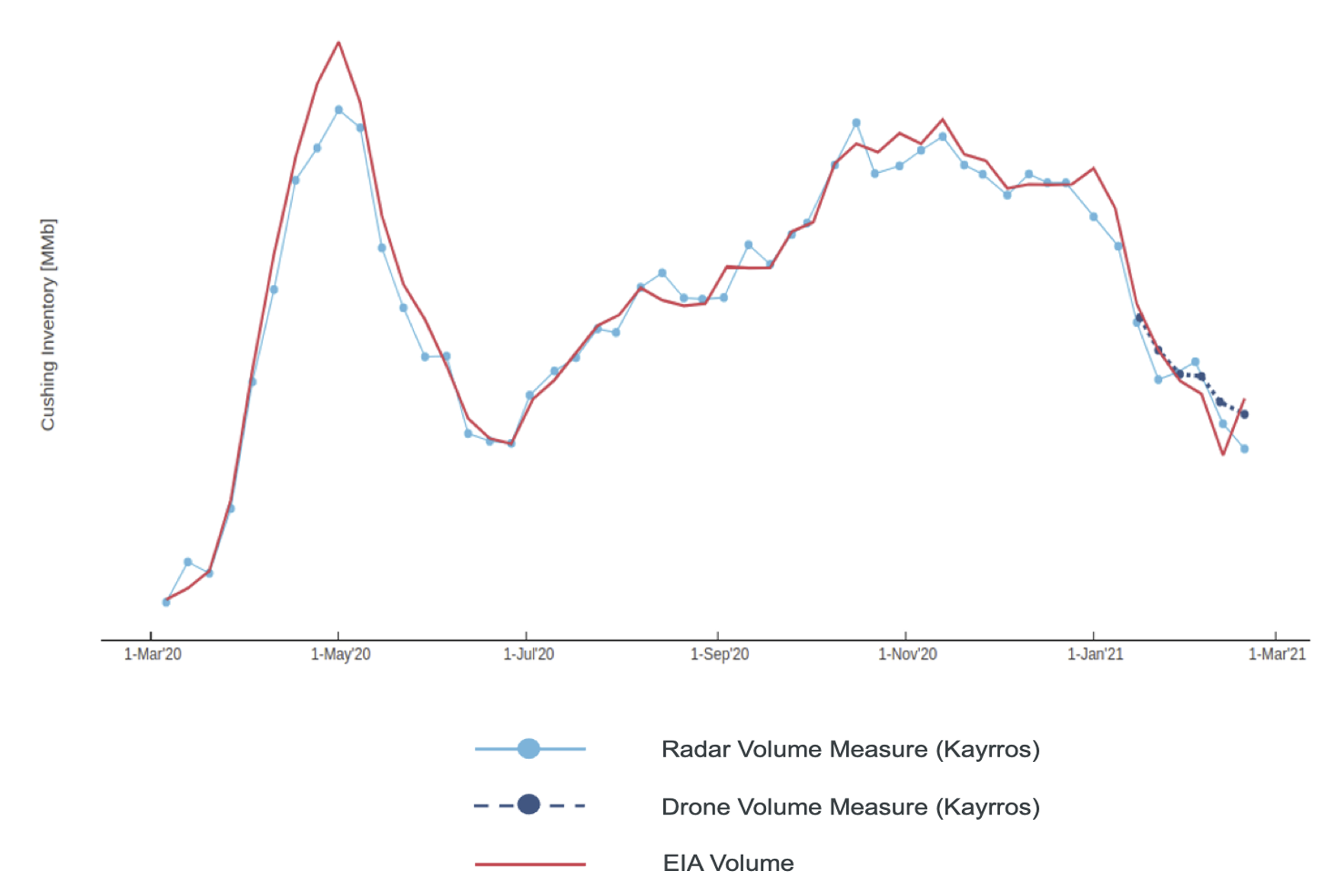 Figure 2. Kayrros publishes Cushing inventory levels every Wednesday and Friday, ahead of our competitors and the EIA release (Source: Kayrros) 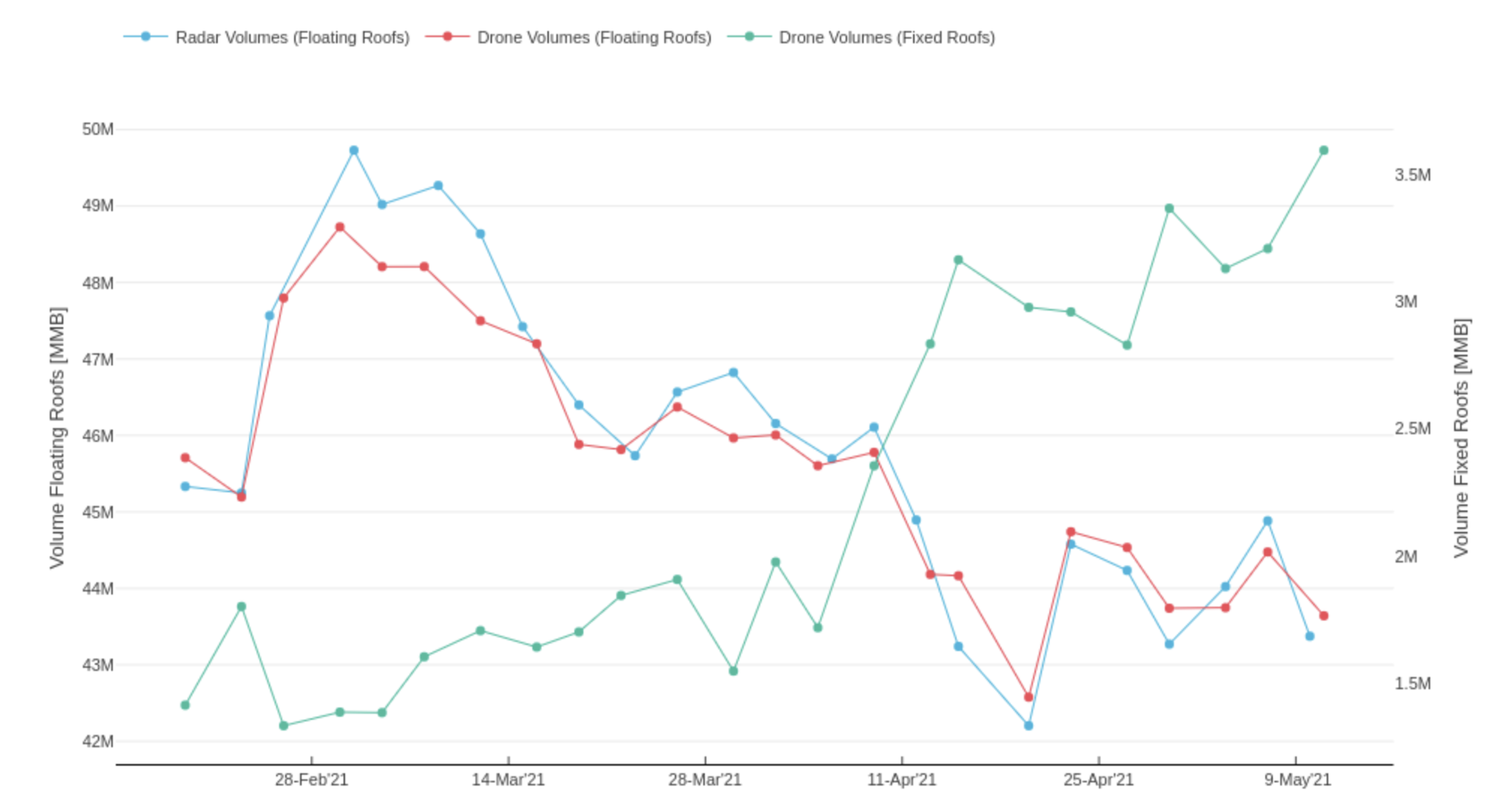 From this observation, Kayrros has built a whole new process to guarantee the accurate reading of Cushing crude oil inventories every Friday with complete coverage, driven by radar and drones.

To learn more about Kayrros Crude Oil Intelligence, reach out to contact@kayrros.com.