Following the Biden Administration’s decision to halt new oil and gas leasing activities across federal lands and offshore waters pending the outcome of a comprehensive review of leasing and permitting practices —a move that some view as the first step toward a permanent ban —we look at the potential impact of an extended leasing and permitting moratorium, with special focus on the Permian Basin. The data in our analysis are derived from Kayrros E&P Intelligence (Ops Tracker) and Methane Watch data, which leverage geospatial intelligence and advanced proprietary algorithms to generate unique insights on E&P production and methane emissions across the Permian. Key findings include:

Wyoming, New Mexico, Colorado and North Dakota would be hit the hardest by the ban

The federal government is the largest landowner in the United States, mostly in the West. Federal lands have played a significant role in the US oil and gas industry in the states where development and production activities have been concentrated. Among the producing states with a strong federal presence are New Mexico, Wyoming, Colorado, and North Dakota. These states would naturally take the hardest hit from a long-term or permanent leasing moratorium. Other producing states, including Montana, Utah, Ohio, and Pennsylvania, would also be impacted, but to a lesser extent. 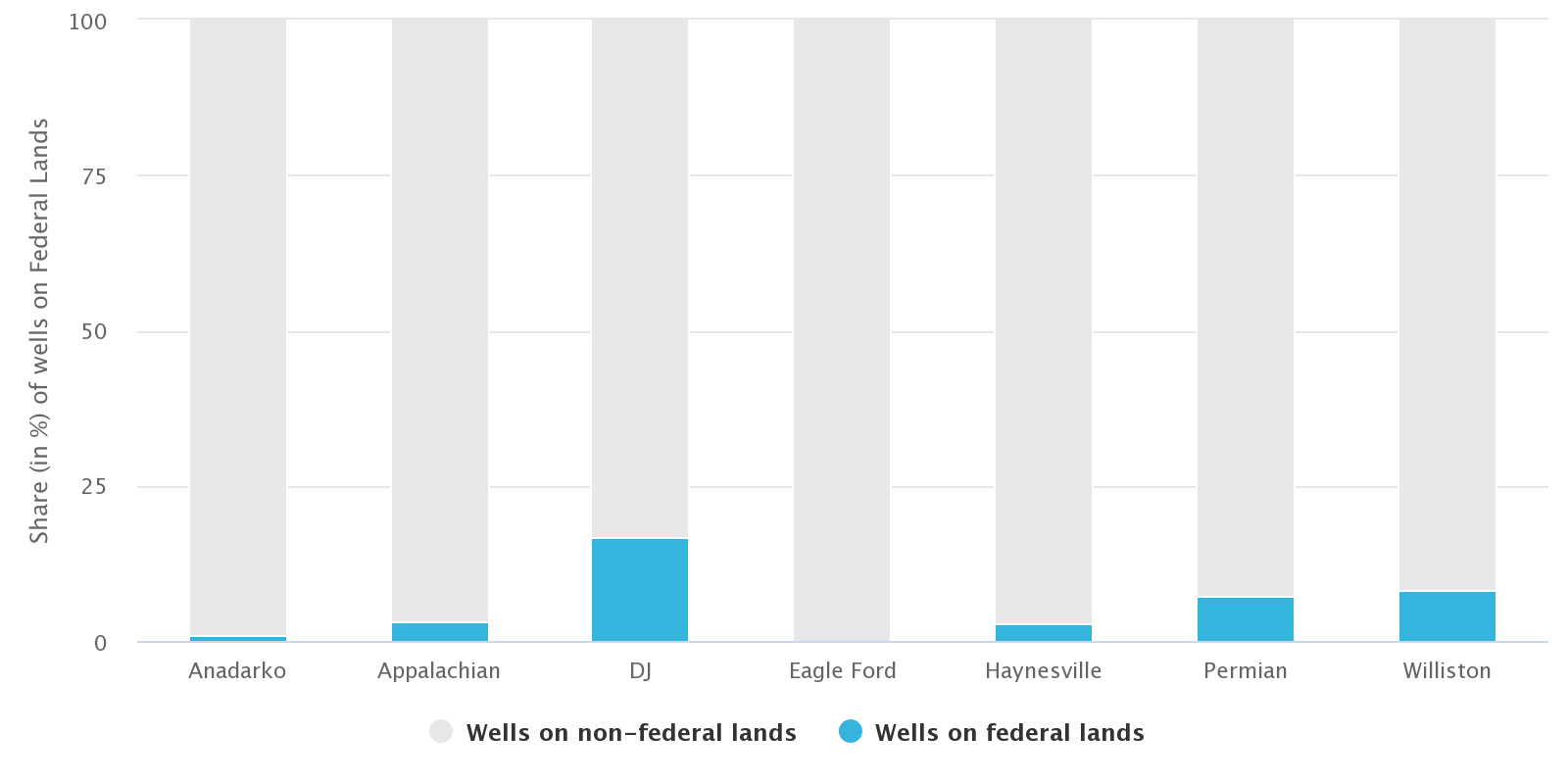 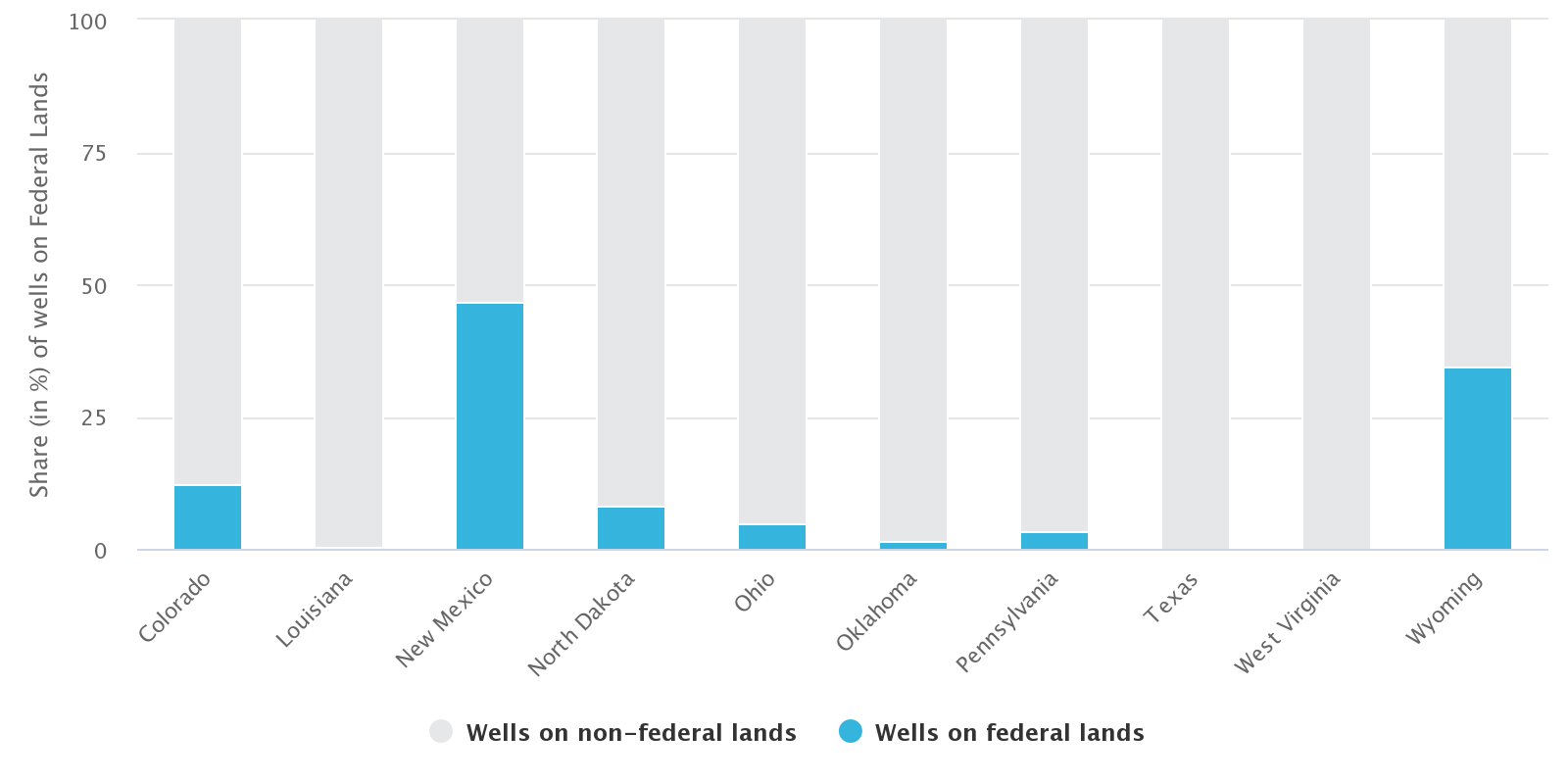 In upstream oil and gas terms, this translates to the DJ, Powder River, Permian, and Williston Basins having a large portion of producing wells on federal oil and gas leases. Kayrros E&P Intelligence data show that ~17% of all existing wells in the DJ Basin were drilled on federal leases. The Williston and Permian Basins have a slightly lower share at ~8% and ~7%, respectively (Figure 2).

The Texas portion of the Permian Basin will be largely unaffected by a federal leasing ban as approximately 95% of Texas lands are privately owned, and another 2-3% are owned by the state. From the supply point of view, all eyes will be on New Mexico’s federal acreage in the Permian Delaware Basin, which has seen increased attention in recent years. Figures 3.1 and 3.2 below show Permian operators with the highest share of wells on federal lands in proportion to their overall Permian and New Mexico inventories. 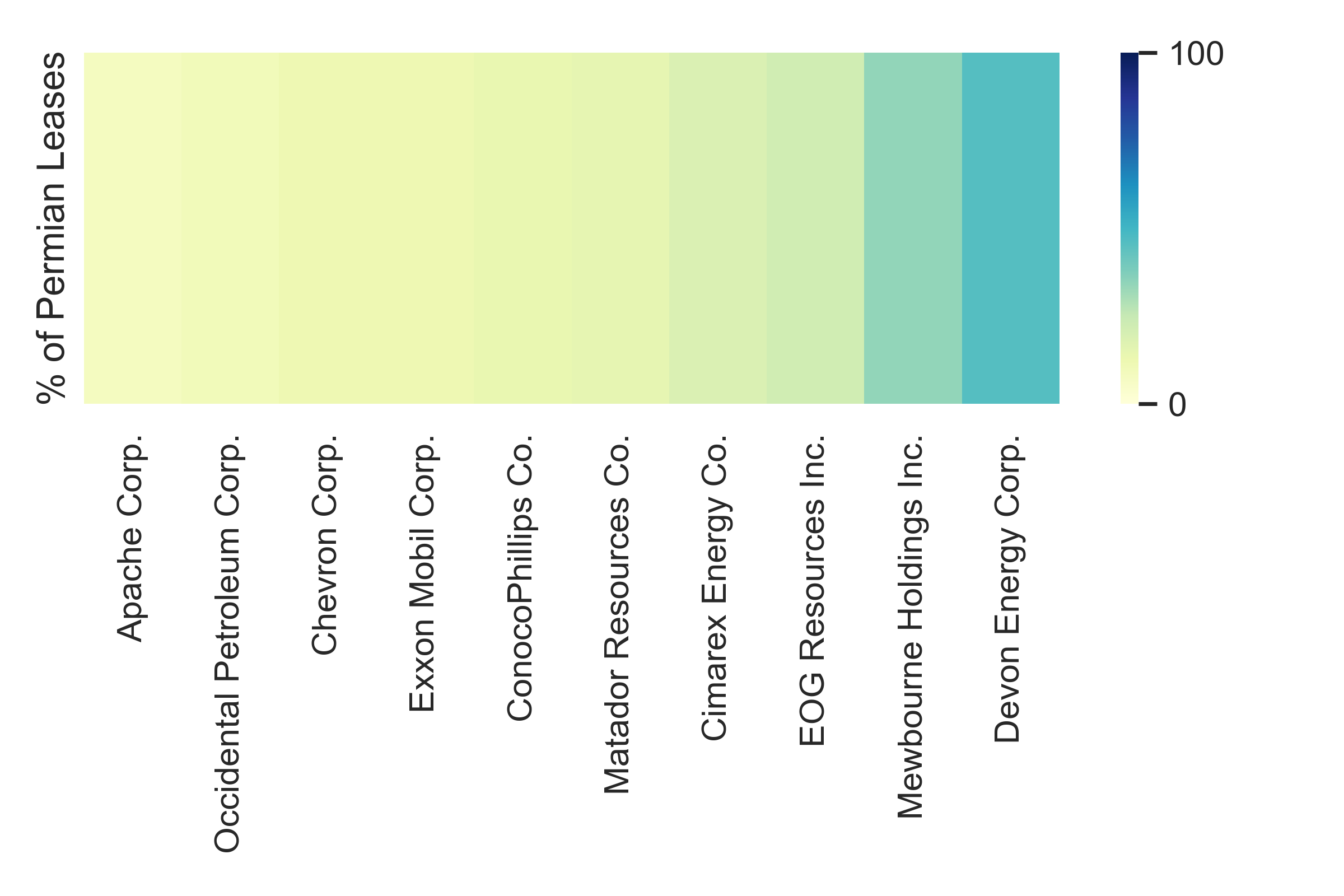 Figures 3.1 and 3.2. Operators with the largest share % of wells on federal lands in proportion to their overall leasehold position (Source: Kayrros) 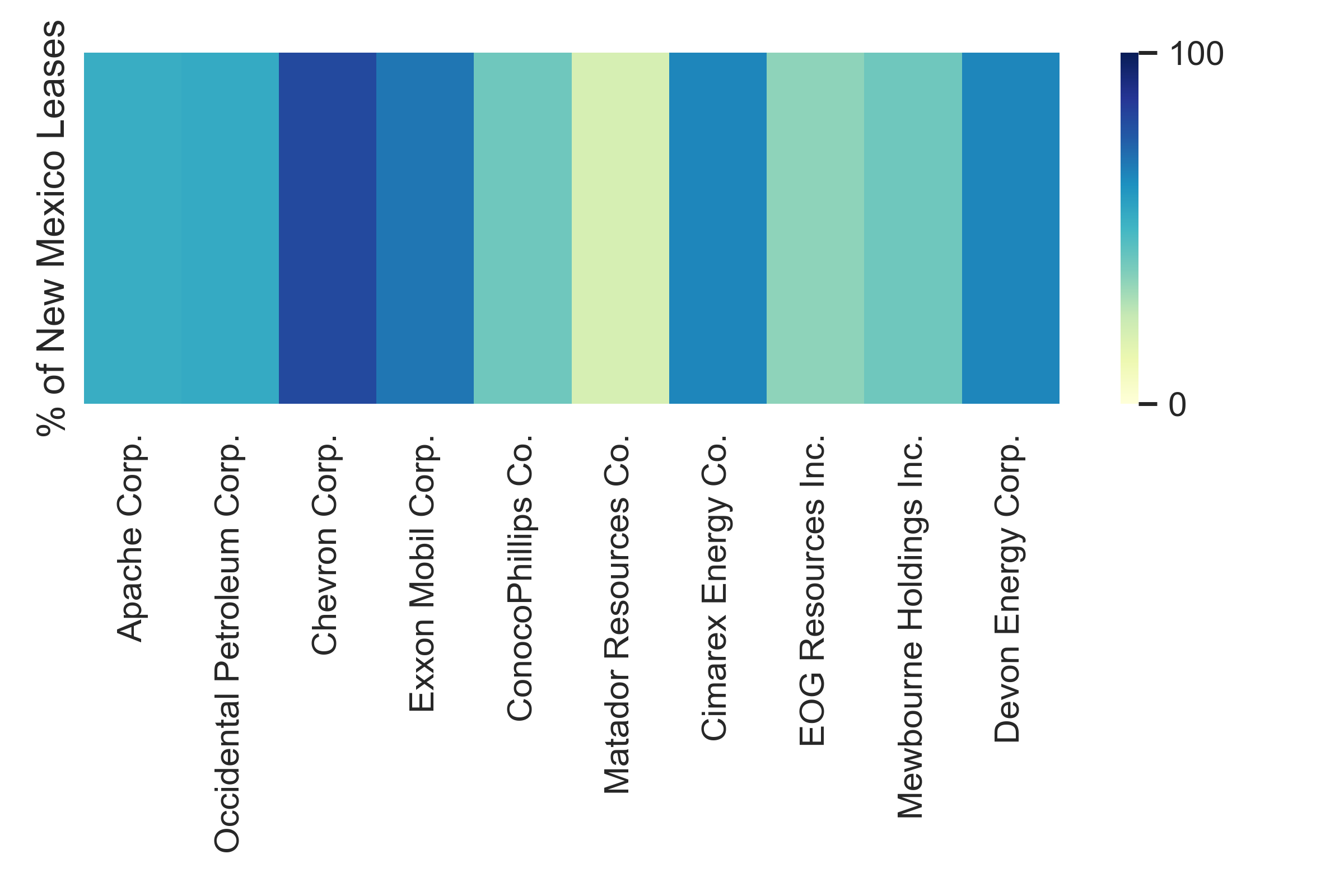 Devon Energy and WPX Energy strategically consolidated their acreage in the Permian in January 2021. Today, the combined company—Devon Energy—is one of the largest producers in the Permian Delaware Basin, with operations stretching from southern New Mexico to West Texas. Notably, a major portion of the West Texas acreage is legacy WPX acreage on non-federal lands—which suggests a strategic move on Devon’s part to reduce exposure.

In terms of overall federal permitting activity in the basin, Kayrros E&P Intelligence data show a 64% year-on-year increase from December 2019 to December 2020. In contrast, permitting on non-federal lands experienced a 37% drop in the same period. This is not surprising given the high level of engagement and intensity surrounding the 2020 presidential primaries, where several Democratic candidates advocated a fracking ban to help fight climate change. In anticipation of the ban, oil and gas operators went full force into permit filing on federal lands despite the overall slowdown of upstream activities due to Covid-19. Faster turnaround time on permit approvals during the last months of the Trump administration hastened the stockpiling. These efforts escalated in the second half of the year as Joe Biden, who had outlined plans for a clean energy future, secured the Democratic nomination for president.

Figure 4. Permitting activity in the Permian, federal versus non-federal lands

During his first week in office, President Biden put a 60-day pause on the issuance of new leases and drilling permits on federal lands, resulting in a sharp decline in federal permit filings beginning in January 2021. The non-federal permitting activities, on the other hand, showed clear signs of recovery.

Looking at the current permit inventories on federal lands in the Permian Basin, there will be no shortage of wells to drill in the near term.

There is much uncertainty in the scope and future evolution of federal oil and gas leasing programs. On March 25, a spokesperson for the US Department of Interior clarified that the leasing moratorium does not impact permitting on existing federal leases. The Bureau of Land Management (BLM), an agency within the US Department of Interior responsible for administering federal lands, is currently gathering public comments on the matter. And while most operators have amassed ample inventories of drilling permits on existing federal leases to maintain production levels in the short term, alternative strategies are likely being evaluated to build long-term resilience to potential changes in the regulatory landscape. When it comes to leasing, it is common practice for operators to maintain large inventories of land as they go about the prospecting process, which acts as a funnel for qualifying potential drilling locations and determining whether a prospect is worth pursuing or not.

As noted in our previous analysis from December 2019, wells producing from federal leases enjoy higher peak productivity rates. In addition, federal leases administered by the BLM have a flat royalty rate of 12.5%, compared to the 18.75%-25% rate typical of private lands. For a cost-efficient operator, these two factors can result in comparatively attractive cash flows, as long as the somewhat lengthier permitting process on federal leases does not outweigh these benefits.

Should the moratorium on federal leasing and permitting be extended, a shift in drilling activities may occur to core non-federal areas with favorable geology and strong performance potential. However, as the Permian core acreage is nearing exhaustion, continued efficiency improvements and cost reductions will be needed to achieve competitive economics in non-core areas. We could potentially see operators with stronger cash positions acquire smaller competitors with quality inventories on non-federal lands to build a more resilient portfolio. We could also see multi-basin players allocating capital outside the Permian Basin to other US plays, with multi-national E&Ps having the option of going outside the US.

In 2019 and 2020, production from federal leases accounted for ~9% and 10.7%, respectively, of the total Permian Basin production in barrels per day. Seven operators contributed the vast majority of this.

While a long-term moratorium on federal leasing and permitting would disrupt a notable portion of onshore US crude oil supply, these barrels are not irreplaceable. If federal lands remain durably off-limits, we will likely see drilling and production activities shift to non-federal lands to meet near-term energy demand until alternative energy sources fill the gap. Oil and gas states with a high proportion of federal lands, such as New Mexico and North Dakota, would be hit the hardest as their economies largely depend on drilling and production activity.

Greenhouse gas emissions from oil and gas production would be similarly affected. Today, the bulk of upstream emissions in the Permian Basin results from venting and flaring of associated natural gas production. When flared, the gas is released into the atmosphere as carbon dioxide. On the other hand, when produced gas cannot be safely flared, or when the flares are not fully functional, it is sometimes vented directly into the atmosphere as methane, a greenhouse gas that is 84 times more potent than carbon dioxide in the first 20 years. According to Kayrros Methane Watch, methane emissions from upstream activity in the Permian Basin amounted to 2.77 million tons in 2019 and 1.98 million tons in 2020. Only 7.2% and 8.0% of all the emissions recorded in the Permian Basin in 2019 and 2020, respectively, came from wells located on federal lands.

This leaves us with a question about the role and relative effectiveness of a federal leasing ban in fighting climate change, especially when considering its economic impact on producing states. The data suggest that more stringent regulations on venting and flaring activities enforced nationwide could achieve a significantly larger reduction in upstream emissions than restricting field activity on federal lands alone. To date, several states, including New Mexico, Colorado and Alaska, have already adopted regulations to limit natural gas venting and flaring as the first step toward reducing methane waste. Stronger federal methane regulations could extend these benefits nationwide.

Recent advances in remote-sensing technologies now make it possible to monitor, detect, measure and attribute methane emissions at scale and cost effectively. Once detected, most emissions can be eliminated at marginal cost. Independent verification of emissions also makes it possible to develop a system of incentives for emission-free operations and let responsible operators extract a premium for good performance. Doing so would bring larger climate benefits than a limited halt on new leasing while allowing producer states to keep the economic benefits of responsible resource development.